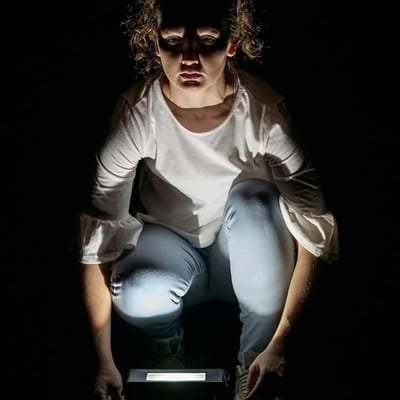 What do I want to do with it?
This was a scratch performance. It had positive feedback from both the company and audience members. The themes of anxiety, depression and psychosis are still very current in today's society. The key focus was on those people who live with sufferers of mental health; partners, friends and family. I would like to conduct more research with people in Birmingham, which would lead to a R&D with a core group of performers. I would like to explore verbatim as well as written text. I will continue to build partnerships with creatives in London and seek a movement director in the West Midlands as I believe the themes lend themselves well to somatics and visual metaphor.

The process
Amelia Cardwell and myself decided to base our research on those who work or have relationships with people with mental health. Mental health was also an illness we both understood due to our own personal experiences of the illness.

My role was agreed as a co director, collaborating with Amelia Cardwell (movement director) on the genesis of our piece, given the working title of ‘Broken’, which was performed at the Lyric Hammersmith in London. At The piece showed how mental health impacts the lives of those who ‘care’ either in the professional arena or the personal. It had elements of verbatim – real interviews re-constructed – and some scripted from the interviews by the writer David Hale, with whom I have collaborated before. Amelia and I used questionnaires to interview friends, family and colleagues. Anne Bogart stated that to create theatre: ‘You need to say something. You need technique. You need passion’ (Bogart :2007)