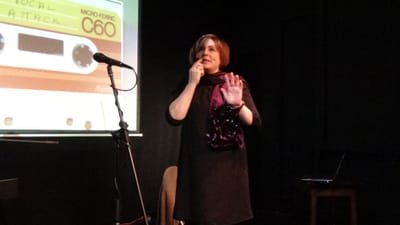 ‘There are no-holds barred as Law examines pivotal moments in her life thus far. 'Some of her frank revelations blindside us, with Law’s very candid demeanor keeping us drawn in. She’s a thoroughly engaging and like-able performer'

Theatre of the Gods

'Delivered by a personality and humour to be reckoned with, I found this show very moving in its reflections not just on love and adventure, but on growing up and getting older'

'Innovative and Engaging theatre' 'Expressive and Emotional' 'Delyth Law a talented vocalist, entertained and impressed the audience by singing fluently in French, German and English’ 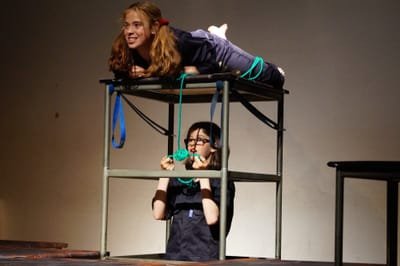 Pezhman @APezhman - This is what the author said about the school production of his play Tics: "Last week I had the pleasure of watching one of plays being revived at Bewdley school and sixth form college. It was a masterful take on the piece which was written over twelve years ago Birmingham Young Rep. Delyth Jones did a fantastic job of creating a collective and cohesive energy among the cast, as well as drawing out some spectacular individual performances. Paul Baxter's multilayered chessboard staging and evocative imagery, along with Delyth Jones' Frantic inspired pulsing soundtrack, made for superb design. And the cast were nothing short of magnificent, as I said before there were individuals that truly stood out, too many to mention here. The most important thing was the way the cast acted as a whole, as a cast - supportive, generous, resonant, with spot-on characterisation and exuberant performances. Its also quite a socially challenging piece, and I think the students should be proud that they go to a school where the Drama Department are bold and brave enough to stage a show that challenges certain conventions. And the whole team did a brilliant job of shoving the dramatic 'arc' back into anarchy. Favourite bits - the long pokey sticks and actually taking the outside scene outside! Inspired. Again too many best bits to mention. Thank you so much for reanimating my monster, you have my love forever."

'the singers had lovely voices that stood out, I couldn't do that myself. You were amazing . I loved it so much it was my favourite (Matilda) I give it 5 stars' Year 5 Bewdley Primary https://youtu.be/VatHzzxZ1W4?t=96

As for your show, I found it a genuinely moving and powerful piece. I have seen a lot of student drama over the years and this didn't feel like that. Firstly, it was much slicker and well put together. But more importantly I think, it felt like those girls owned that show. It wasn't work 'about' them, it was 'of' them. I know what a challenge that could be. It felt a bit like a Company 3 show, which I mean as a complement! You created something really interesting in such a short time, those girls will remember this for the rest of their lives. I really believe that. (MA Student Nicola Coventry) ‘The performance was both moving and revealing. The girls were very insightful in grasping the contradictions within their situation in life and the pressures and uncertainties they face. They clearly understand that despite all of feminisms best efforts, gender identities and image are, with the explosion of social media, more powerful emotional drivers than ever. The unseen forces of the internet were pervasive throughout both their dialogue and physical performances, with an incisive wit that was both disturbing and touching.’ (Headteacher Bewdley School) ‘A truly moving piece. I felt pride in the girls who had shared their emotions and experiences to an unknown audience. I felt sadness from their spoken experiences and was moved by their overall performance. A very emotive piece which made me realise how many challenges our girls are facing every day. ‘ (Teacher) ‘Absolutely amazing, explained what teenage years are all about. Brilliant acting! (Parent) If only they didn’t have to be so fearful. Amazing cast and music.’ (Coventry University Undergraduate)